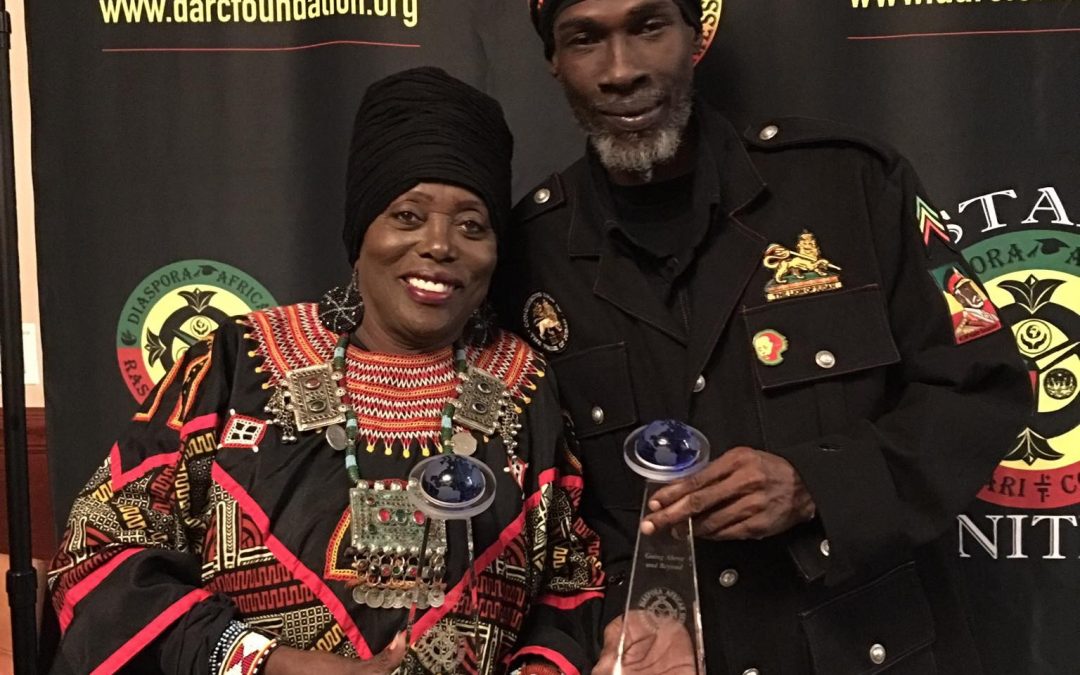 Beloveds, this photo came up on my Facebook memory. He is so mystic. Here I and I were in New York receiving our award from the DARC Foundation for our contributions to the RastafarI Reggae community. He was so funny when he was hugging me, he said, “Don’t worry Makeda, I’m not going to mess up your makeup”. We sat at the same table and enjoyed the evening together.

We’ve been together for 20 years. I’m heartbroken, yesterday I was in mourning. How fortunate I and all of you are to know this modern day Prophet. He came to me early that morning when they broke the news to me, I was crying hysterically, and he told me not to cry because he was more powerful on the other side and he would guide me through all the trials and tribulations that I was going through. He told me to keep moving with the WorldBeat Center for the community and that WorldBeat Center was a powerful force to unite all people.

We saw him twice this year, once in May and then he wanted to come back in September. We are a humble cultural center and we can usually budget a concert every other month and in September we already had the Mighty Diamonds scheduled but when Vaughn asks anything I always do it. He knows I’m always here for him.

Each time he forwards we always stay up all night and reason until 6 in the morning. WorldBeat Center is truly his home to do what he wants. He was my Melenik, the son of Queen Makeda. He would advise me about life and about jealousy and resentment. He would break it down and tell me to keep going forward no matter what. I’m a lot older than him but he was my teacher. He was aware of people, good and bad. He worked with them all. I’m going to miss the late-night reasoning sessions. All y’all remember that? He had no problem staying up and we were all falling asleep hanging in there. He was always available after his shows for his audience. He knew he lived his life for I and I.

I had 3 beautiful beings that came into my life after they transitioned. One was my mother giving me instructions when she passed. The second was Bob Marley, I was in trouble and he guided me. And with humble gratitude, this time Vaughn came to guide me. Oh I forgot to tell you the last thing he said. It was like Harriet Tubman, I can’t believe it, “I’m going to make a better place for us”.

Brothers and sisters Reggae music is our Underground Railroad. So many people have given up their lives for this music to give you awareness and consciousness. The artists are our conductors in the Underground Railroad and it’s up to us to choose liberation and the liberation is from envy, resentment, and division. In an interview with me, Vaughn talked about everything being interconnected. We exist because of each other, Ubuntu. If you see your brothers and sisters that need help, go out of your way to help them. There’s too much division in our movement. We all make mistakes so forgive, love and serve. His Imperial Majesty said we have to be members of a new race. Listen to Akae Beka’s “Members of a new race”. Keep your meditation and your prayers. I’m very blessed to still be here and you never know when the Most High will take me too. We all have to be ready and value the veterans of Reggae music while they are living and keep the roots and culture in Jah music.