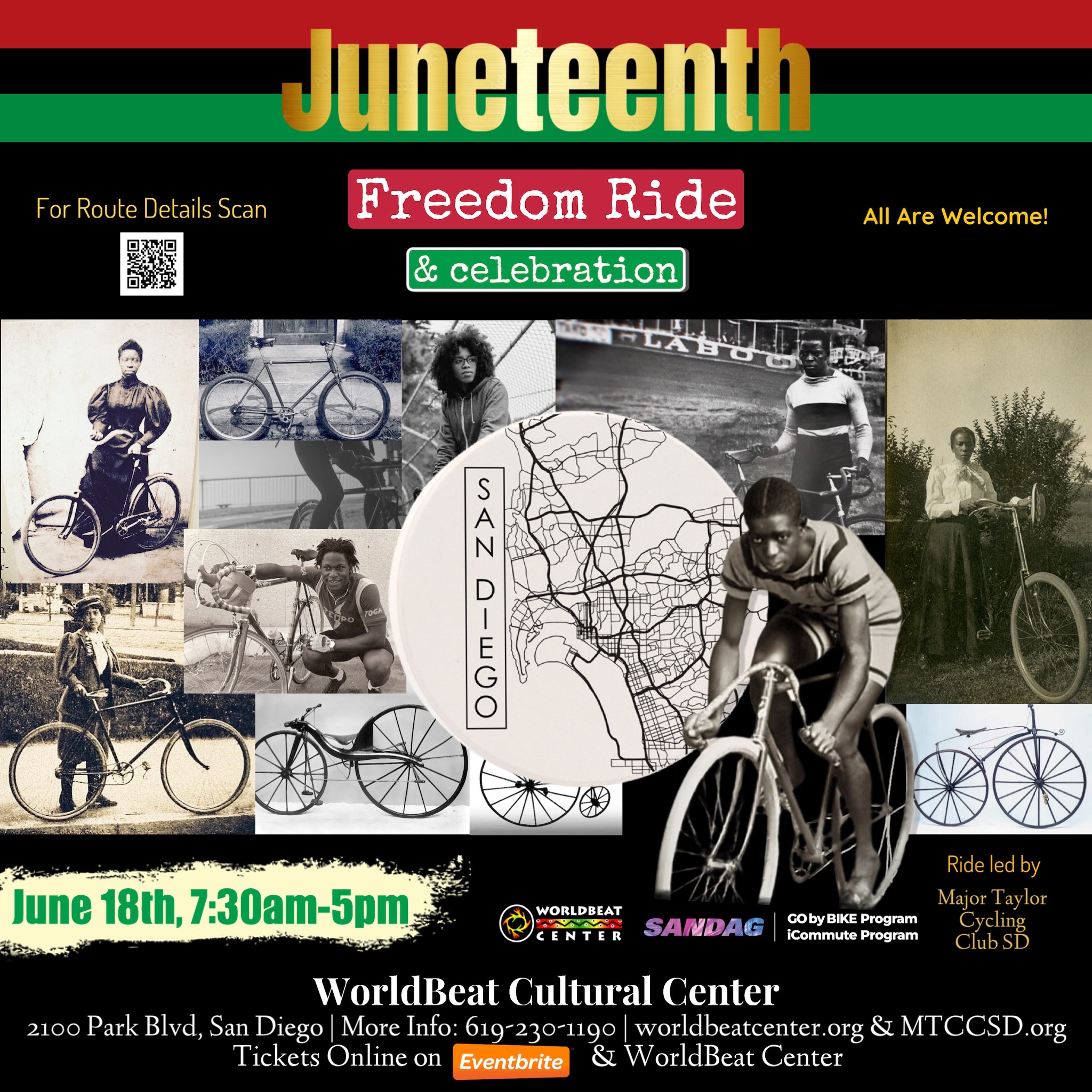 Major Taylor Cycling Club San Diego (MTCCSD) and WorldBeat Center are honoring Juneteenth with a bike ride and celebration. This is the 2nd annual Freedom Ride for MTCCSD and participants will be riding a 54-mile course around San Diego, Chula Vista, National City, and Coronado Island.  You can view the route on the Ride with GPS website.  For more information, contact MTCCSD via email at [email protected]

Juneteenth Freedom Ride received a GO by BIKE Mini-Grant from SANDAG as part of National Bike Month efforts to encourage biking as an everyday transportation choice.

Kick-Off 7:30AM from WorldBeat Center
Rollout 8:15AM

About Major Taylor
American bicycle racer Marshall Walter “Major” Taylor (1878-1932) was the world’s first black sports superstar. He was world cycling champion in 1899, American sprint champion in 1900, and set numerous track cycling records. Nicknamed “Major” in his youth in Indianapolis and later known as “the Worcester Whirlwind” after his adopted hometown in Massachusetts, he was the second African-American world champion in any sport (after Canadian-born bantamweight boxer George Dixon of Boston won his title in 1891). In the Jim Crow era of strict racial segregation, Taylor had to fight prejudice just to get on the starting line. He faced closed doors and open hostility with remarkable dignity. In his retirement he wrote his autobiography, “The Fastest Bicycle Rider in the World.”

Juneteenth is the oldest nationally celebrated commemoration of the ending of slavery in the United States.

From its Galveston, Texas origin in 1865, the observance of June 19th as the African American Emancipation Day has spread across the United States and beyond.

Today Juneteenth commemorates African American freedom and emphasizes education and achievement. It is a day, a week, and in some areas, a month marked with celebrations, guest speakers, picnics and family gatherings. It is a time for reflection and rejoicing. It is a time for assessment, self-improvement and for planning the future. Its growing popularity signifies a level of maturity and dignity in America long over due. In cities across the country, people of all races, nationalities and religions are joining hands to truthfully acknowledge a period in our history that shaped and continues to influence our society today. Sensitized to the conditions and experiences of others, only then can we make significant and lasting improvements in our society.